Fired up! After a Great Week in the NPR Next Generation Virtual Newsroom 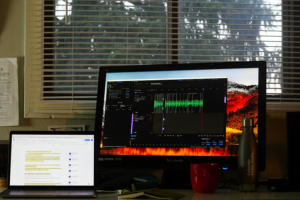 My daily set-up for the 9-5ish grind.

Holy smokes! It’s been a crazy five days in NPR Next Generation Radio’s digital newsroom. One of the hardest parts of the week has been filtering my smokin’ fire puns burning in my brain while reporting on wildland firefighting during COVID-19. So I won’t be holding back now…

I thought I wouldn’t get much out of Tuesday’s “Audition 101” session since I’ve been working with the software for a few years, but that thought went up in flames fast. The session, like many throughout the week, made me a better storyteller. The session also re-ignited a passion for sound mixing. I had forgotten how fun it can be to learn new editing tools and strategies.

That’s just the start of what I got out of the week – Next Gen fired on all cylinders. A particularly memorable take away is how to effectively structure a story. Before this week I would’ve said chronological order usually creates the most effective narratives. But changing the order of my story around to be a sort of chronological sandwich, which starts and ends with important information, even though it’s not the exact start on the timeline, took the story to the next level.

I loved firing questions at accomplished journalists like Selena Seay-Reynolds, who taught me all sorts of Adobe Audition tricks, Kevin Beaty who taught me to start an article with pictures of people, and Laura Isensee who helped me reorder my story and use tons of active verbs. My mentor Maggie Freleng lit a fire under me, with her calm yet ambitious demeanor throughout the project and incredible tips which seem to be never ending.

It was also great to work with people from CPR. Meeting awesome people from the station really fanned the flames of my desire to work there someday.

I thought I would feel burned out during this week. Or at least after. But I feel more fired up than ever. I’m excited to take what I learned on to the next story.

Thank you NPR Next Gen Radio!