Working on my Next Generation Radio project over the last week has been an incredible experience. I have gotten to meet and work with so many amazing people, and they have really made this experience into an unforgettable one. I began this project with high hopes of telling a story that involved Colorado’s changing climate — environmentally and the social change in response to the pandemic. However, after reaching out to one person, then three, then six people with no responses back, I began to feel pretty beaten down. Seeing my contemporaries take off with their first or second choice of subjects had me feeling like I may not have been cut out for journalism. Finally, I reached out to Mother Cabrini Shrine and spoke to JoAnn Seaman. As this week draws to a close the only thing I’d change is that I wish JoAnn had been my first choice of subjects to interview. Her passion for her work and belief that the shrine is a serene place left me feeling reassured even after my first phone call with her. JoAnn fostered this peaceful feeling and several of the NextGen team would tell me they feel more relaxed after listening to my audio piece. In a week of fast-paced work and adapting to challenges, I’m so glad I could tell a story that reminds the reader it’s okay to slow down, too. 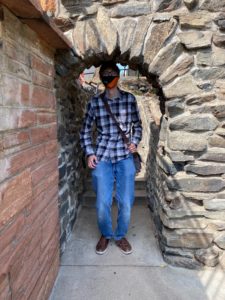 While on location at Mother Cabrini Shrine, I was stopped for an “Obligatory Leif being tall photo.” Photo: Patrice Mondragon

Of course, I could not have completed this project alone. I’m so thankful to Doug and Traci for organizing the project and encouraging us throughout the week. I’m thankful to Kevin, Patrice, Selena, Megan, Erica, Ard and Robert for helping me give my project the quality and polish that this story deserves. Most of all, I’m thankful to Graham for mentoring me through the process and showing me what it takes to be a great journalist. Through the week, he sat on panels, met with publishers and worked on a slew of stories all while raising his children, but he was always able to make time for me when I needed his input or assistance. Graham really came through for me, and I doubt I would have made it through the week without his mentorship. His attitude confirmed for me something that I’ve felt in myself for a while — A positive attitude that tackles adversity as it arises is the most essential skill to bring into the workplace.

I’m glad that projects like NextGen are there for young journalists who are unsure of what the next step is. I’m glad that it has continued on during the pandemic when so many opportunities for college graduates are being scaled back. Mostly, I’m proud to now be an alum of Next Generation Radio.