is a set of audio and digital stories highlighting the experiences of people whose lives have changed dramatically during the pandemic.
Sam Sanson reports for NPR’s Next Generation Radio. Lance Elmore is a deputy incident commander for the Cameron Peak Fire. He navigates two crises – a pandemic and one of Colorado’s largest recorded wildfires. His new normal involves lots of online meetings, which he says are more impersonal and can miss people’s emotions.

Between Two Crises: Fighting Wildfires During a Pandemic

Colorado faces one of the worst wildfire seasons ever recorded and the COVID-19 pandemic, which has infected nearly 70,000 people across the state.

As the world goes virtual to combat the spread of the coronavirus, so do some aspects of wildland firefighting.

Lance Elmore, a deputy incident commander for the Cameron Peak Fire, leads meetings with administrators and firefighters over Zoom instead of in person.

Since the Cameron Peak fire ignited on Aug. 13 west of Fort Collins, it has burned more than 104,791 acres — roughly the size of Denver —  and is still ablaze.

In addition to dealing with the fire, Elmore works to slow the spread of COVID-19.

“We’ve had 23 positive [COVID-19] cases on the fire. That’s through its entirety, you know, from the beginning in August. So yeah, we have to deal with that,” Elmore says. 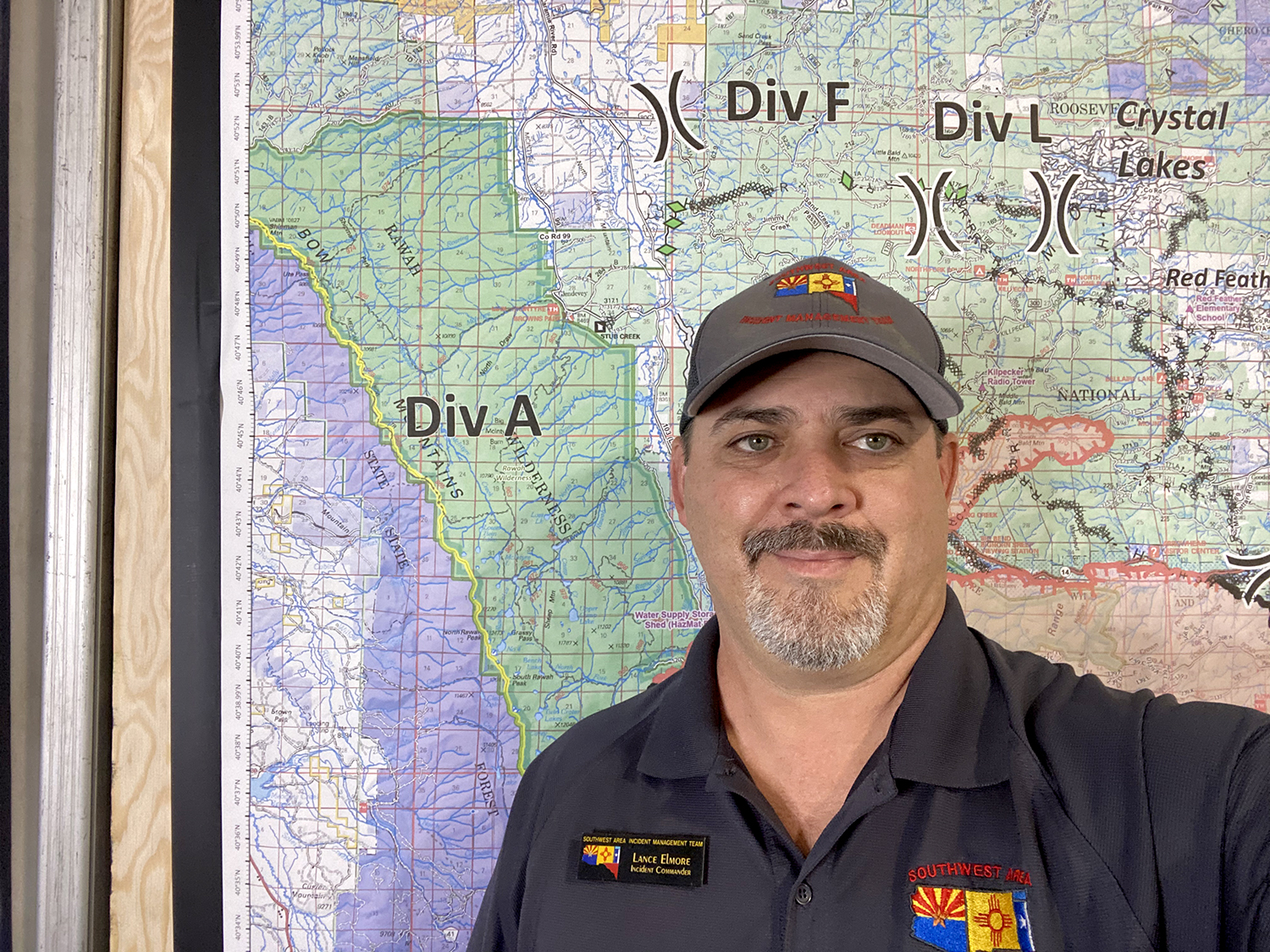 For almost 30 years, Lance Elmore has worked with forests and fires. He poses in front of a map at the Cameron Peak Incident Command Post. (Photo courtesy of Lance Elmore)
Elmore says they work closely with county health departments. He says if someone tests positive for COVID-19, the protocol is similar to when anyone gets it — contact tracing and isolation.

“Early in the year, the phrase kind of caught on, which was like a ‘module of one,’” Elmore says.

A ‘module of one’ is the small group of firefighters on a crew, sometimes assigned to a truck or engine, who all stay together in a unit to avoid the spread of COVID-19, he explains.

“If you were on a 20-person crew or on an engine with five people, that’s your module of one. That’s your little family unit,” he says. 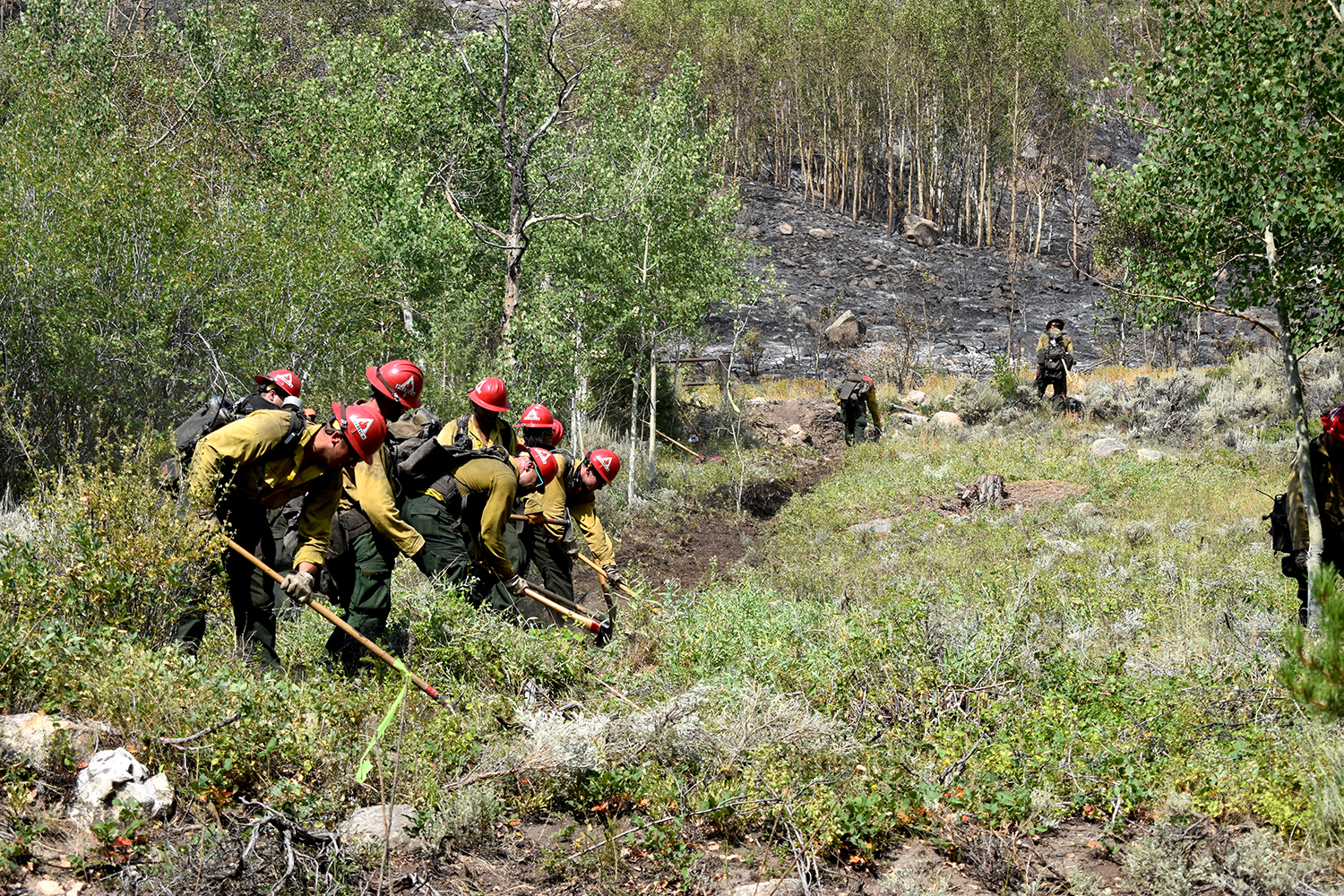 A firefighting crew constructs a barrier between flammable materials to slow the progress of the Cameron Peak Fire. (Photo courtesy of Cameron Peak Fire)
In the past, firefighting teams were centralized at bases near fires with places to sleep and a caterer. Elmore says that’s where most people stayed, including off-shift firefighters.

“We would have had one large briefing with most of those people,” he says.

That’s not happening anymore. For this interview, Elmore was reached over Zoom in a hotel room near his command post, which is set up in Loveland at the Budweiser Event Center about a two hour drive from the fire.

However, Elmore says people on the frontline use the same tactics and strategies to fight the fire. It’s the communication methods that have changed. They’re doing briefings on the radio and over Zoom.

“It’s challenging, you know, starting out with the pandemic in March,” Elmore says. “We started talking about ways to do this and not have those large groups and what kind of technology we needed.”

Elmore says in April and May they used simple technology, like phones with the Zoom app, for briefings. Since then, he says, they’ve gotten more advanced using newer devices that have multiple microphones and show a 360-degree view of the room.

During the briefings, administrators and firefighters discuss plans, safety, and what’s happening on the ground, since people on the frontline may not know what’s going on at other sections of the fire. 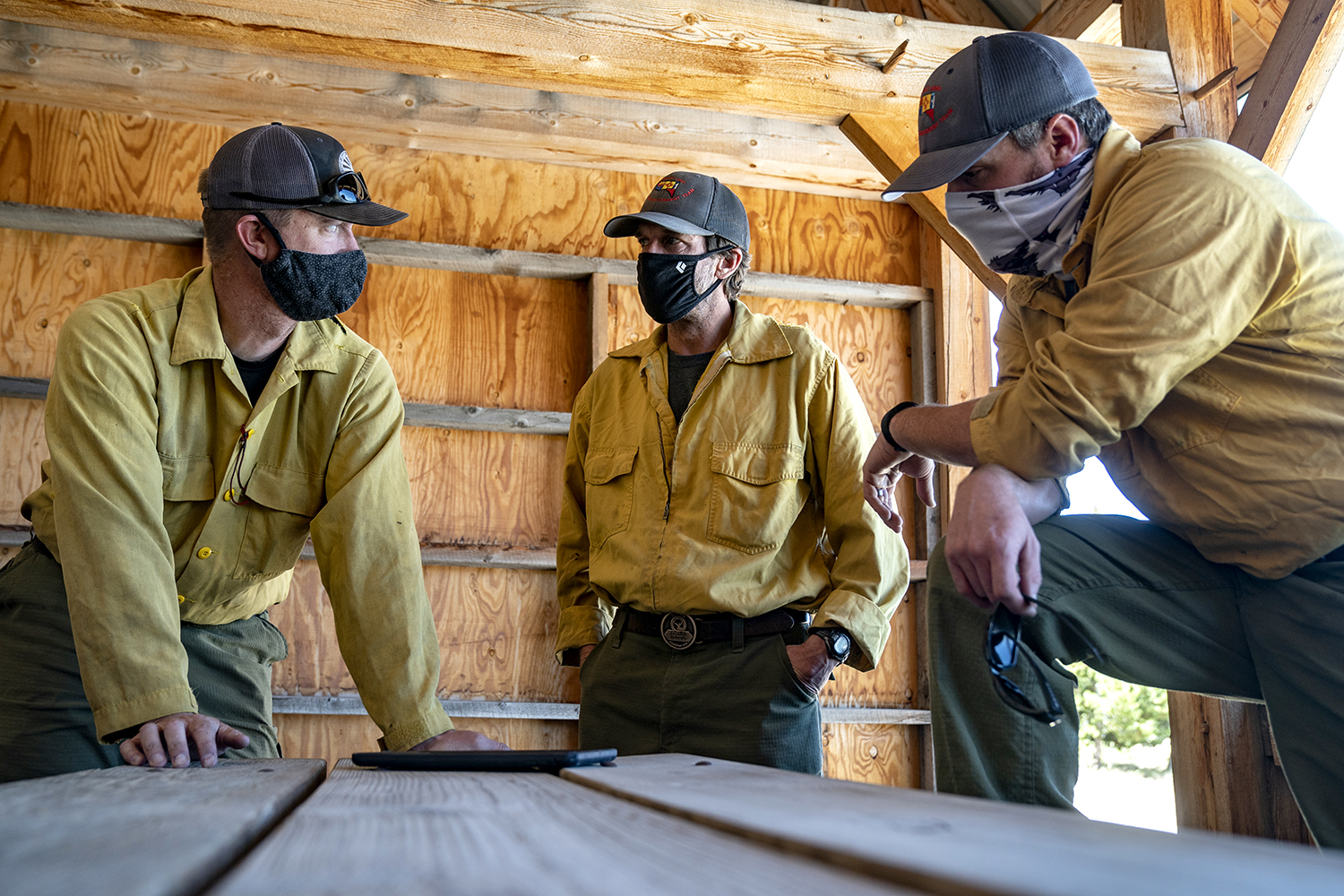 He says online meetings can save valuable time for officials who, in the past, drove hours to meet in person. But he sees drawbacks with virtual communication. He says he feels he needs to overcommunicate since he can’t see people’s reactions or read body language.

“One of the biggest downfalls to the technology side of things is there is just the time it takes to communicate and how easily things are misunderstood,” Elmore says.

And he says that’s a challenge when things aren’t going well with a fire.

Elmore joined the Forest Service in 1992 when Zoom didn’t exist. He’s now 50 with a graying beard and striking green eyes.

“I was asked early on, even in high school, you know, if I thought that fighting fire would be something that I wanted to do. And I say, no, I think I’ll pass on that,” Elmore says.

Everything changed for Elmore when he took a temporary job as a wildlife technician when he was in his early 20s.

“I went to a couple, two or three fires that summer, and that was that was kind of it,” Elmore says.

Elmore says relationships get built quickly on the job because firefighters put their life in each other’s hands.

He says he has friends he met through firefighting, and they stayed in contact, but some have died in the line of duty.

“Those are the things that always kind of stick with you. You just don’t forget them,” Elmore says. 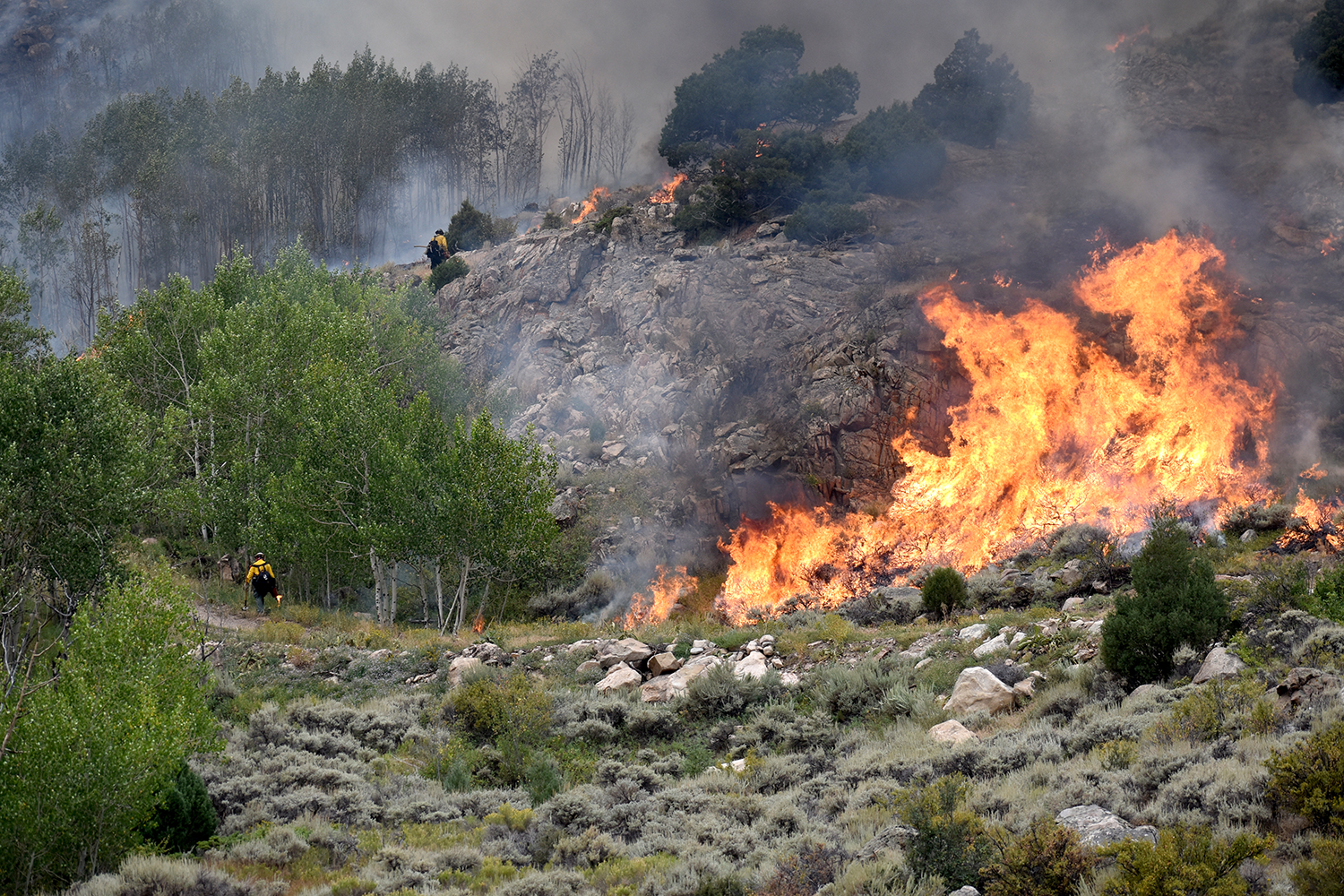 Firefighters ignite a controlled burn using drip torches near State Highway 14. There have been no reported injuries or deaths of firefighters on the Cameron Peak Fire. (Photo courtesy of Cameron Peak Fire)
Relationships are different this year for Elmore, since COVID-19 forced his command post further from the fire and turned most interactions with firefighters virtual. Elmore says it’s difficult to read the emotions of his team online. But he believes some virtual changes are here to stay, especially with administrative meetings.

“I would prefer to sit down in a room with people and talk to them face to face and have more of that interaction,” Elmore says. “But I don’t think we’ll go back.”