is a set of audio and digital stories highlighting the experiences of people whose lives have changed dramatically during the pandemic.

Zain Iqbal reports for NPR’s Next Generation Radio. Sarah Jackson started inviting asylum seekers from around the world into Casa de Paz in 2012, where she provided food, shelter, and a sense of certainty. During the COVID-19 pandemic, Sarah has created a new space to meet asylees just outside the gates of an Aurora detention center.

Hospitality on Wheels: An Immigrant Support Group Offers A Snack, A Way To Call Home And Some Security During COVID-19

A white Ford Transit van waits on the street across from an immigration detention center in Aurora, Colorado. A large banner on one side of the van reads  “Casa de Paz – Welcome Center” and below in Spanish, “Centro de Bienvenida.” The rear doors are propped open and  reveal a furnished interior, with a bed, an ice chest and coats on hangers. A large welcome mat says “home,” with the “o” in the shape of a red heart.

When COVID-19 Forced People to Practice Social Distancing, One Coloradoan Took Her Support For Immigrants Mobile 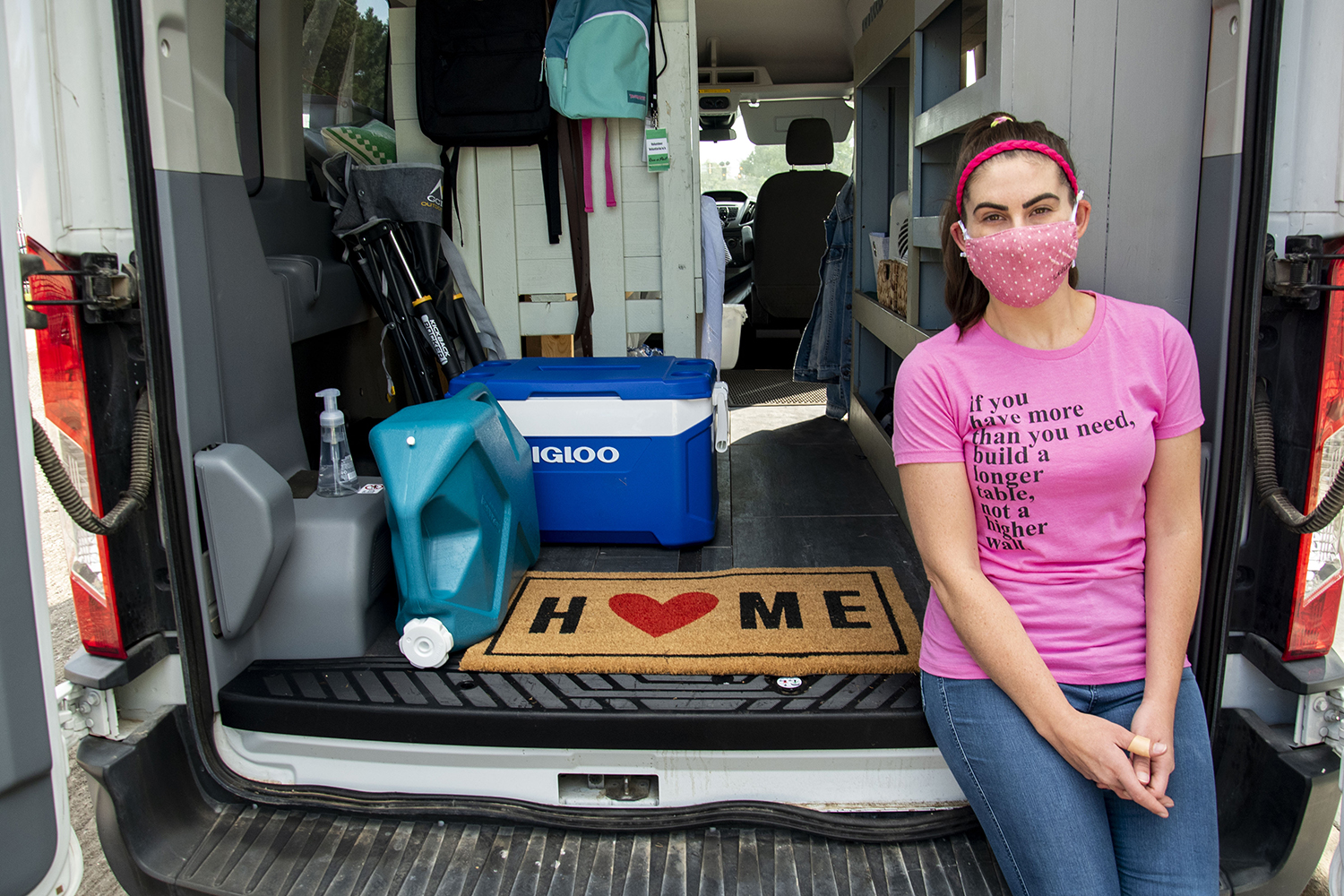 Casa de Paz founder Sarah Jackson sits inside her organization’s newest initiative: “Casa on Wheels,” a van that serves immigrants right as they are released from detention in Aurora, CO. (Photo by Zain Iqbal)

“We want to purchase our own van and do something creative,” said Sarah Jackson, the founder and director of Casa de Paz. The organization provides food, shelter and temporary security to asylum seekers released from the U.S. Immigration and Customs Enforcement processing center.

“Maybe make it a little bit colorful. It’s a white van with tinted windows, which is the exact same vehicle that people are transported to this detention center in, so we’re mindful of that.”

The van is part of a new Casa de Paz program called “Casa on Wheels.” In some ways, it’s an extension of their mission, but also reflects how the pandemic has forced them to adapt.

“COVID-19 gave us an opportunity to seek clarity on what we had been doing,” Jackson said, “and how we can think of creative ways to implement changes to be excellent at providing hospitality.”

Jackson and local volunteers meet released detainees outside the gates of the detention center. They often only carry their processing papers and the clothes they’re wearing.

ICE detains people for a number of reasons, including crossing the U.S. border without proper documentation or before deportation. ICE also holds some asylum seekers while judges determine their eligibility to remain in the country.

The Aurora detention center is in an isolated part of town. A few auto repair shops and a small strip mall form the facility’s perimeter.

“Within seconds of someone being released, they can see us and they know that they are in good hands and we’re going to take care of them until they get to their final destination,” Jackson said.

Jackson and other volunteers stock the van with food, water and extra clothing. A stack of pre-paid phones sits on a shelf ready for asylum seekers to call their loved ones. Asylees can log onto a laptop to arrange travel plans or decompress by watching YouTube.  One basket contains cleaning supplies, wipes, hand sanitizer and masks—essential due to the global pandemic. 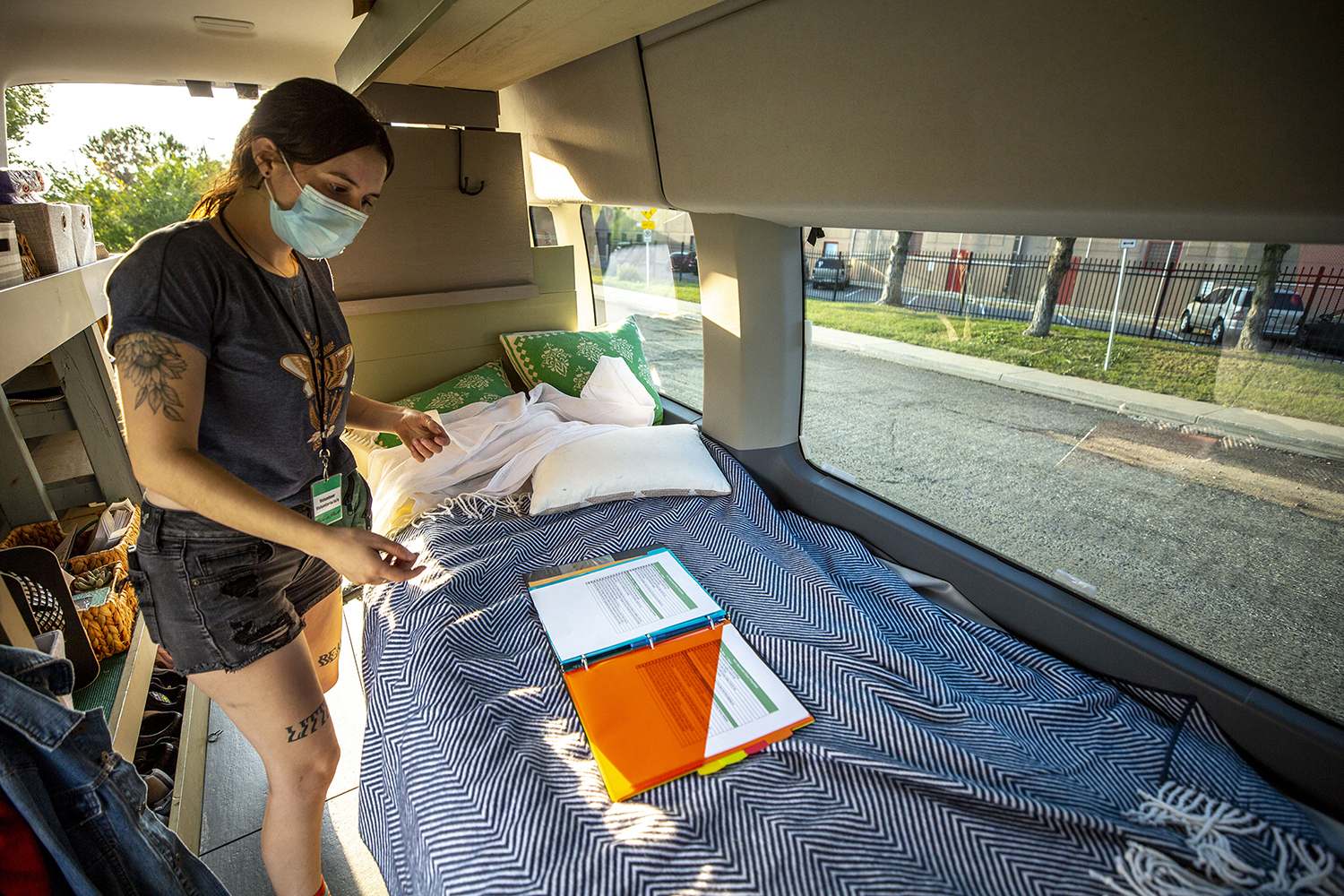 Colette Dante, a volunteer at Casa de Paz, reviews her end-of-day checklist. Volunteers wait at the van for detainees to be released from the back door of the detention center, Monday through Friday from 9 a.m. to 6 p.m.  (Photo by Zain Iqbal)

In 2010, Jackson was working at a Colorado Springs church, when the pastor was invited to join a trip to the U.S. southern border and Mexico to observe conditions for immigrants and asylum seekers.

“I volunteered to go because it was a free trip to Mexico. And I thought, ‘Sure, I’ll go on a vacation,’” Jackson said. “When I got down there, I was able to hear stories from people who were directly impacted by not only the border wall, but other immigration policies that our government has put into place.”

Jackson researched detention centers in Colorado and learned about the ICE facility in Aurora. She moved to Denver and started Casa De Paz to provide support, which she calls hospitality, to released immigrants.

“Where I’m from in the southern part of Cameroon, it’s a total war zone,” said Oliver Binda. “There are no hospitals, schools are shut down. The French(-speaking) government is killing the English side of the country.”

Binda is one of more than 3,000 individuals from 77 countries that Casa de Paz has hosted since it opened in 2012. The nonprofit relies on volunteers and donations; it only has two employees. Before the pandemic, they served asylum seekers at a rental house 15 minutes from the detention center.

Life at Casa de Paz before the pandemic. Susan Luerssen, a volunteer, and Lucero Cordova, a former intern, help a young man who was released earlier in the evening arrange travel plans (left). Released detainees from Bangladesh share a meal cooked by volunteers at Casa de Paz. (right). (Photo by Zain Iqbal)

“Imagine spending months in detention, and they deport you to where you come from,” Binda said. “It took me three months to get from Africa to the U.S.-Mexico border. We spent all of our money to come to America.”

Binda was among the luckier cases. He hired a lawyer for $7,000 and was eventually granted asylum.

Now he works at Casa de Paz as its full-time host. He and Jackson work to provide detainees with many of the necessities they need to get back on their feet and return to their families or friends. In some cases, they also serve as cultural facilitators.

Jackson remembers once she offered a backpack to a released asylum seeker from Kyrgyzstan, who carried a large stack of documents.

Later, when they returned to Casa de Paz, the asylee asked, through Google Translate, how much he owed for the backpack. Jackson laughed and insisted it was free.

“We need to be sure that when we give someone a backpack, we let them know this is a gift. We’re not selling things. A welcome gift, you know, welcome to the United States,” she said. 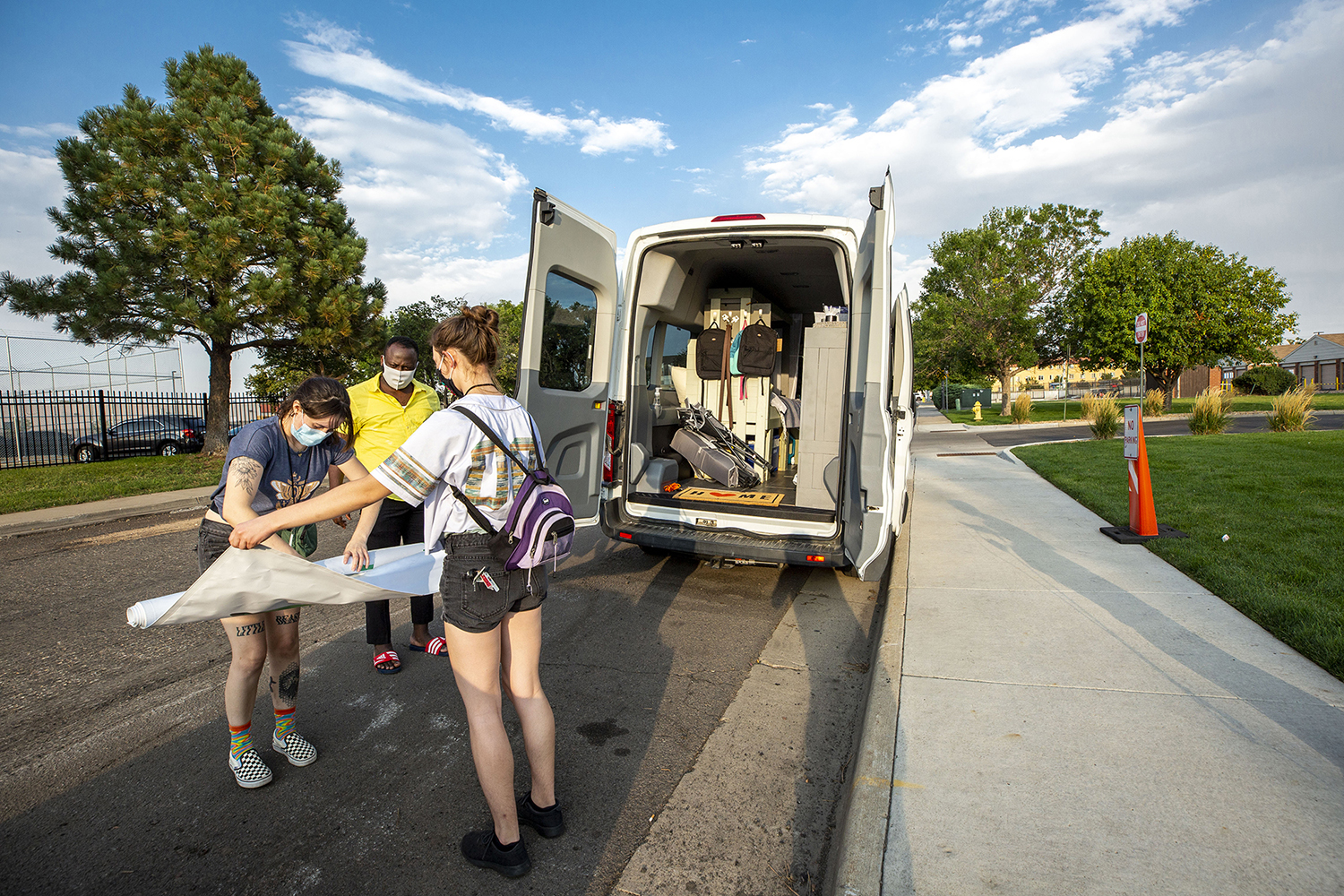 Oliver Binda, Casa de Paz’s full-time host, watches as volunteers Colette Dante and Michelle Driessnack roll up a welcome banner that hangs on the side of Casa on Wheels and faces the detention facility. (Photo by Zain Iqbal)