is a set of audio and digital stories highlighting the experiences of people whose lives have changed dramatically during the pandemic.

Monty Daniel reports for NPR’s Next Generation Radio. Adam Swanson, 28, is an old soul figuring out how to live with new COVID-19 restrictions. When his in-person performances at the Diamond Belle Saloon were shut down, he turned to the internet. Now, Swanson is learning how to balance his passion for ragtime piano, his fears of an aging audience and what happens when ragtime piano season ends.

Young Pianist With An Old Soul Keeps The Ragtime Spirit Alive In Durango, Despite COVID-19 Shutdowns

It’s fairly common to have a piano in your living room. But the kind of music Adam Swanson, 28, plays would surprise most people from the last 50 years. When he sits down at the piano, Swanson sounds out pieces like the Bumble Boogie, a ragtime piano tune from 1946.

Ragtime emerged in the mid-1880’s and peaked in the early 1900’s. It’s known for a fast pace, a syncopated rhythm and a stride-piano style.

“I’m Never Going To Give Up On It”: A Ragtime Pianist’s Journey To Continue Playing COVID-19

“Ragtime is the first truly original American music,” Swanson said. “It’s where jazz and blues and swing and hip-hop and R&B and rock and roll and everything else we know and love came from. A lot of people don’t realize that it’s sort of the granddaddy of all popular music.”

He’s had to navigate his passion and profession as a ragtime piano player amid COVID-19 shutdowns and new restrictions.

When the pandemic began, Swanson was in Washington, D.C. preparing for an East Coast tour. Then, his show dates dwindled as the coronavirus closed bars and clubs. Worried that airports would shut down next, Swanson flew back to Durango. Once back, he faced a dilemma: How to survive?

The place he regularly performs, the Diamond Belle Saloon, had shut down. Since piano is his primary income, Swanson turned to the internet.

“I saw some of my friends playing live on Facebook,” Swanson said. “They just use their phones or their iPads or what have you and played performances live on Facebook, and they put up their PayPal or their Venmo address.”

Swanson did just that. From his living room, he propped up his phone and started playing. About 5,000 people tuned into his first performance and left him “virtual tips.” Still, Swanson missed interacting with people at the Diamond Belle. 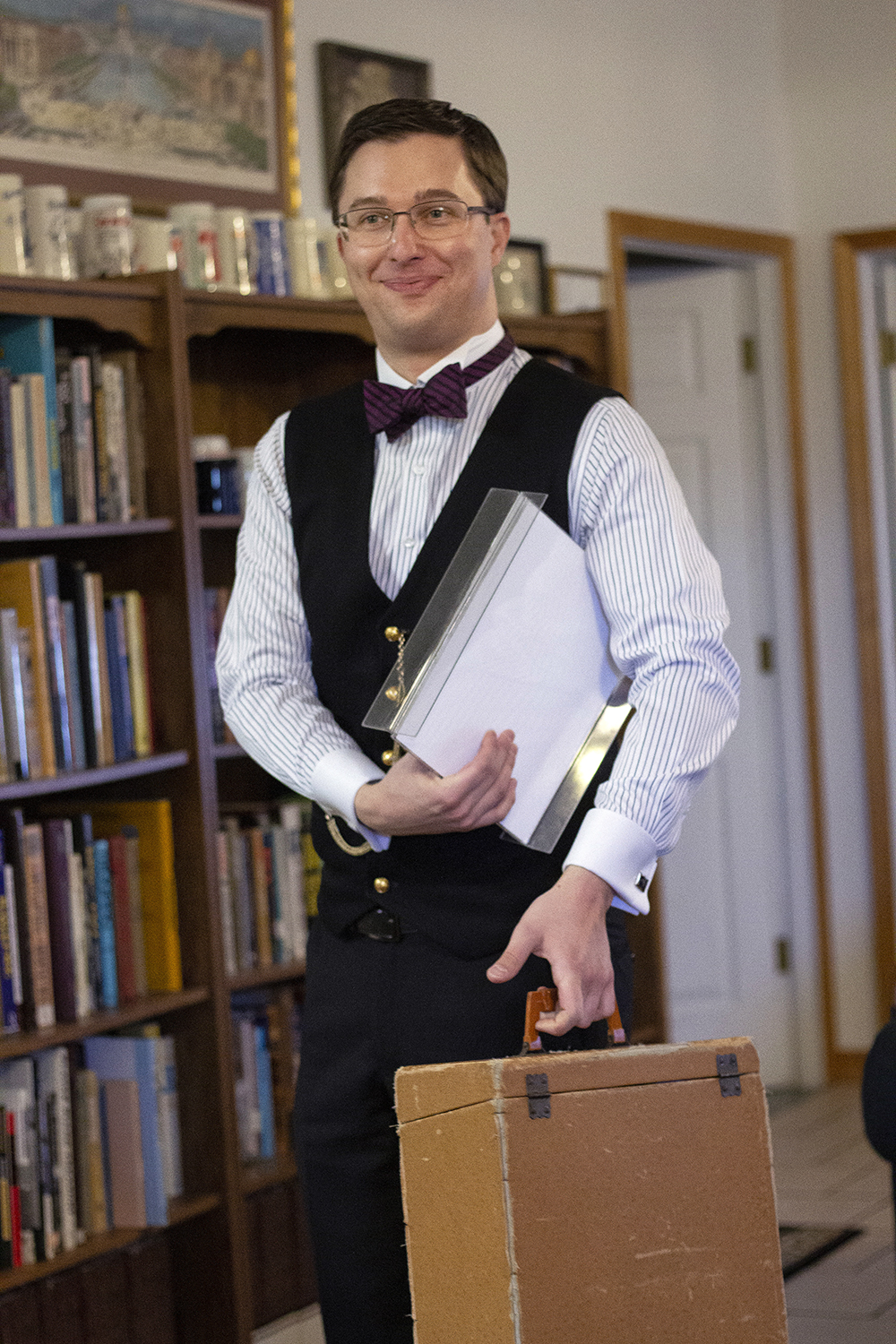 Adam Swanson, 28, carries sheet music and a briefcase in his home as he prepares for his performance at the Diamond Belle Saloon Sept. 21, 2020 (Photo by Monty Daniel)

Swanson discovered the saloon 16 years ago. At 12 years old, he convinced his parents to let him fly from their home in Michigan to see his piano idol, Johnny Maddox, perform in Durango at the Diamond Belle. Swanson had been playing piano for just two years, but already loved ragtime, and Maddox was the only ragtime piano player with a star on the Hollywood Walk of Fame. 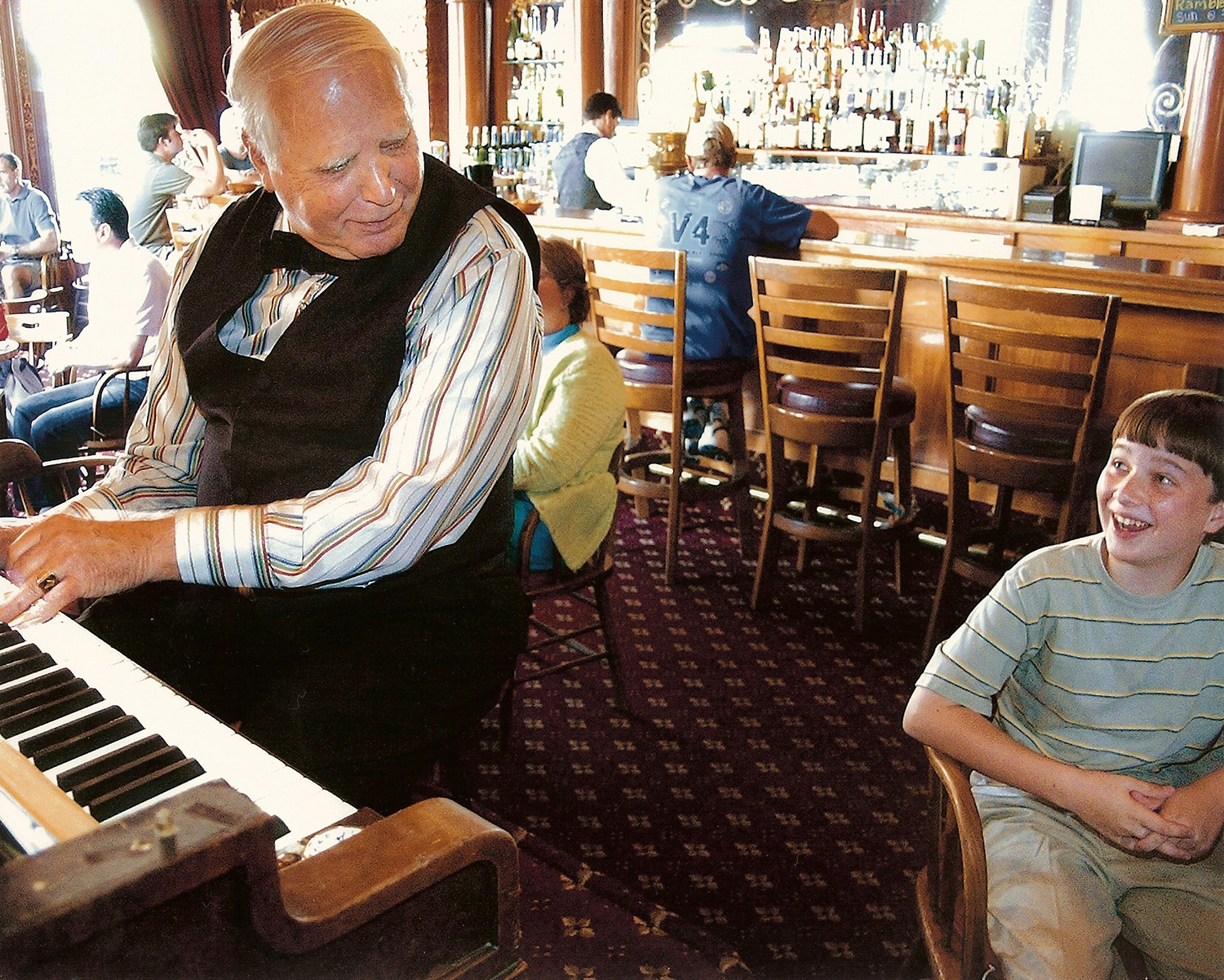 Adam Swanson, 12, with his idol Johnny Maddox at the Diamond Belle Saloon in Aug. 2005. This picture was featured in the Durango Herald. (Photo Courtesy of Adam Swanson)

“The way he played the piano just astonished me,” Swanson said. “It made me feel good. It made me happy.”

He bonded with Maddox and saw him as a second grandfather after his own grandfather died. They stayed closed until Maddox passed away in 2018. Since then, Swanson has kept the spirit of both Maddox and ragtime alive at the Diamond Belle.

Before the pandemic hit, Swanson also traveled the world, sharing his love of ragtime. He’s performed at Carnegie Hall, the Kennedy Center and even in Australia.

“It’s hard for me to get those kinds of bookings here in the United States, partially because I do a very vintage style of music that, you know, it’s not as if anyone living remembers a lot of the songs that I play from their heyday,” he said.

Swanson’s home in Durango shows how much he believes in old-time traditions and music written before 1950. Inside, he’s arranged records, tapes and rolls of sheet music. Just don’t call it vinyl, or he’ll give a history lesson.

“They used to call them LPs and forty fives, not vinyl,” he said, “I mean it’s made of vinyl. But what I like is shellac.”

With a whole room dedicated to sheet music, closets stuffed with tapes and a room upstairs that can barely store his record collection, Swanson is a historian. He can pick up any piece of music in his house and give the year it was released, the musician’s background and details about the recording process. 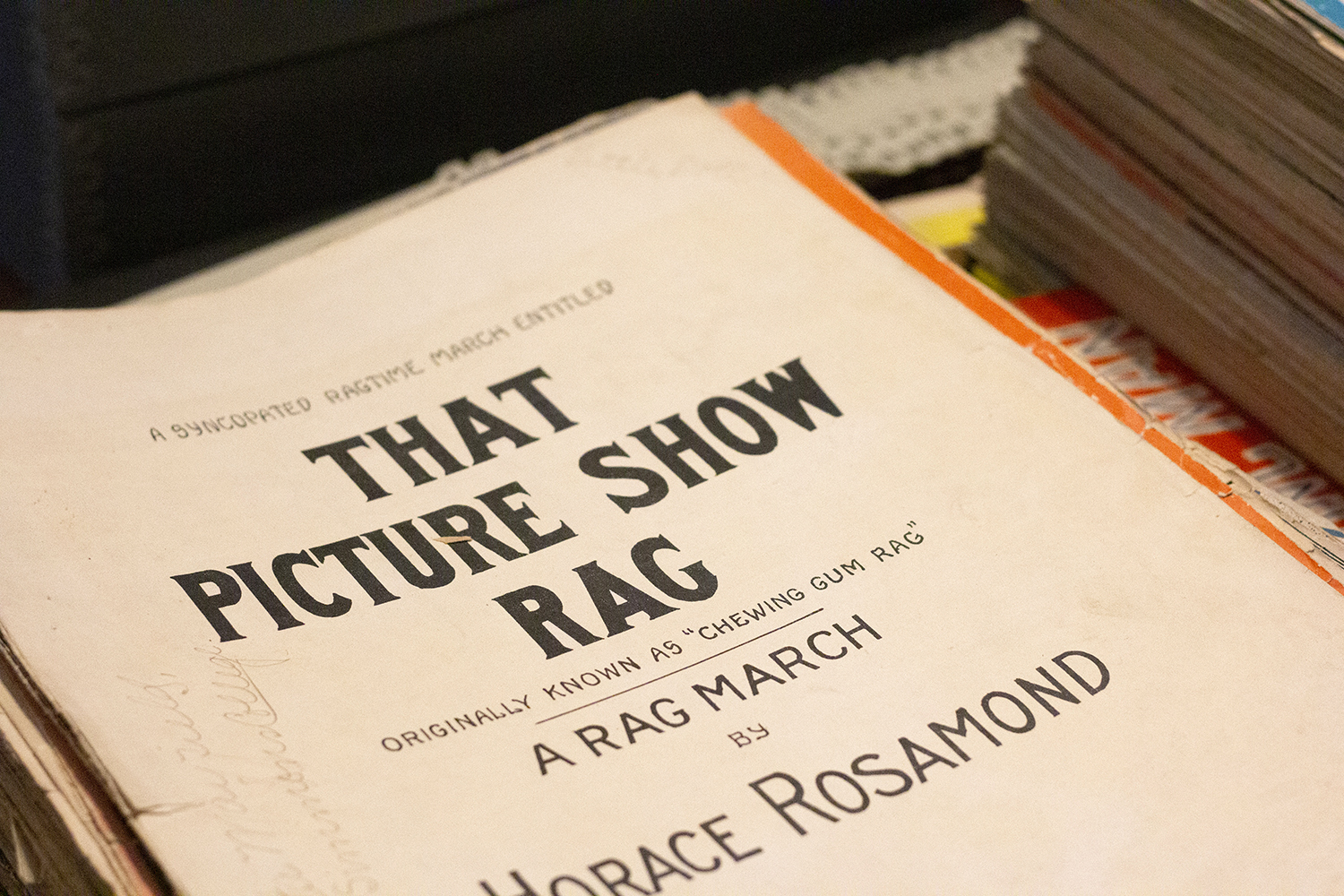 A piece of sheet music in the home of ragtime piano player, Adam Swanson. He has a room dedicated to sheet music Sept. 21, 2020. (Photo by Monty Daniel) 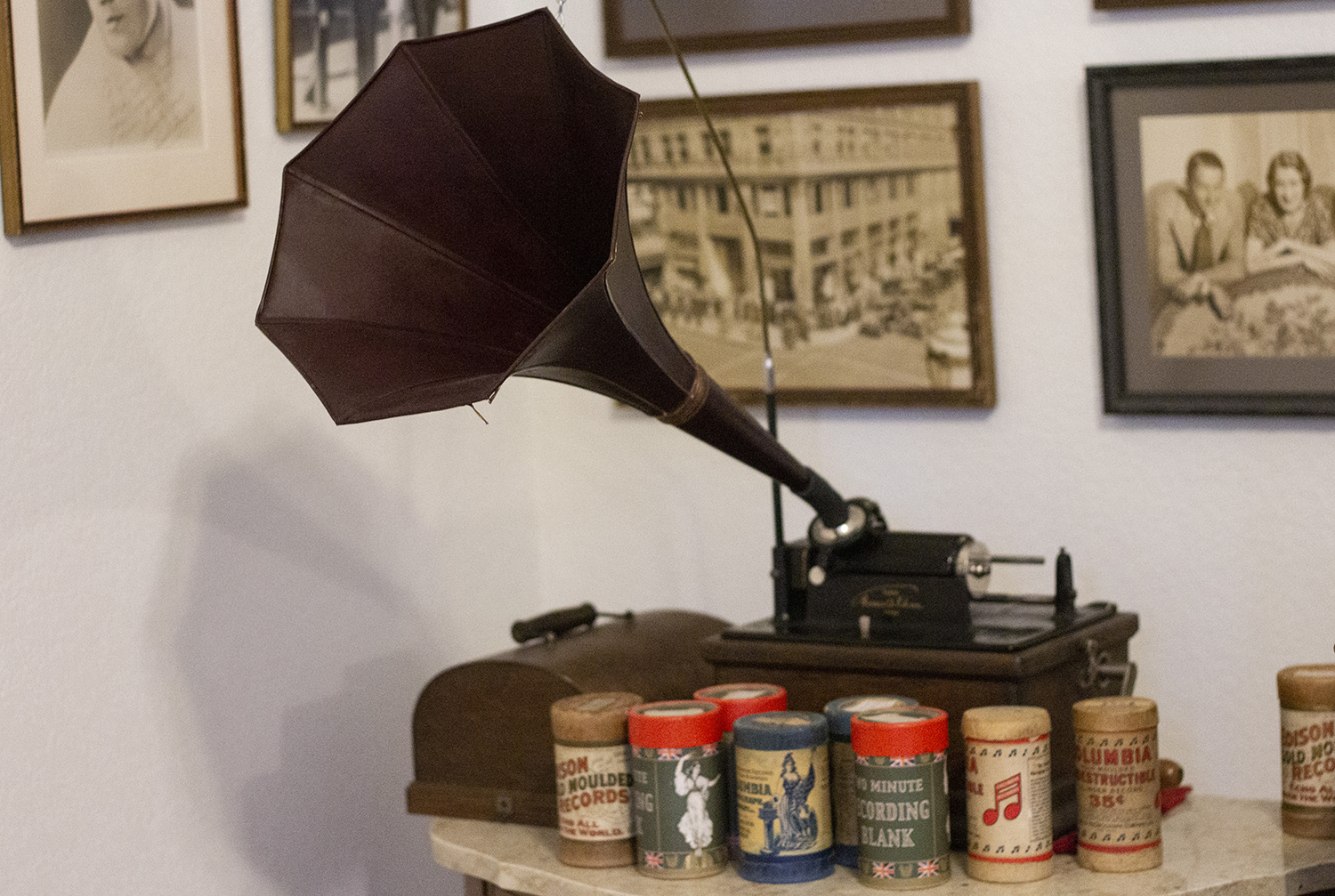 A phonograph and collection of cylinders in the home of ragtime piano player, Adam Swanson Sept. 21, 2020. (Photo by Monty Daniel)

Three months ago, when the Diamond Belle Saloon reopened, Swanson started to play in-person again. But, now there are restrictions with fewer seats and shortened hours. Swanson used to greet patrons with a smile from his piano. Now, he wears a mask as he performs almost every day.

“I do it and I don’t complain,” Swanson said. “I’m grateful to be employed, still doing something I love.”

When winter comes, Swanson will face another challenge: The saloon doesn’t hire full-time pianists for that season. He plans to still perform once a week and pick up extra income with online shows.

“I’m going to have to rely on these virtual broadcasts, maybe teaching a few piano lessons for the first time,” he said.

For now, his art keeps him going. Swanson plays with passion every night at the Diamond Belle Saloon. His fingers fly across the ivory keys as patrons stare in awe. After finishing the last few notes, Swanson spins his chair around to ruckus applause.

“Thank you so much,” he said, “What else can I play for you all tonight?” 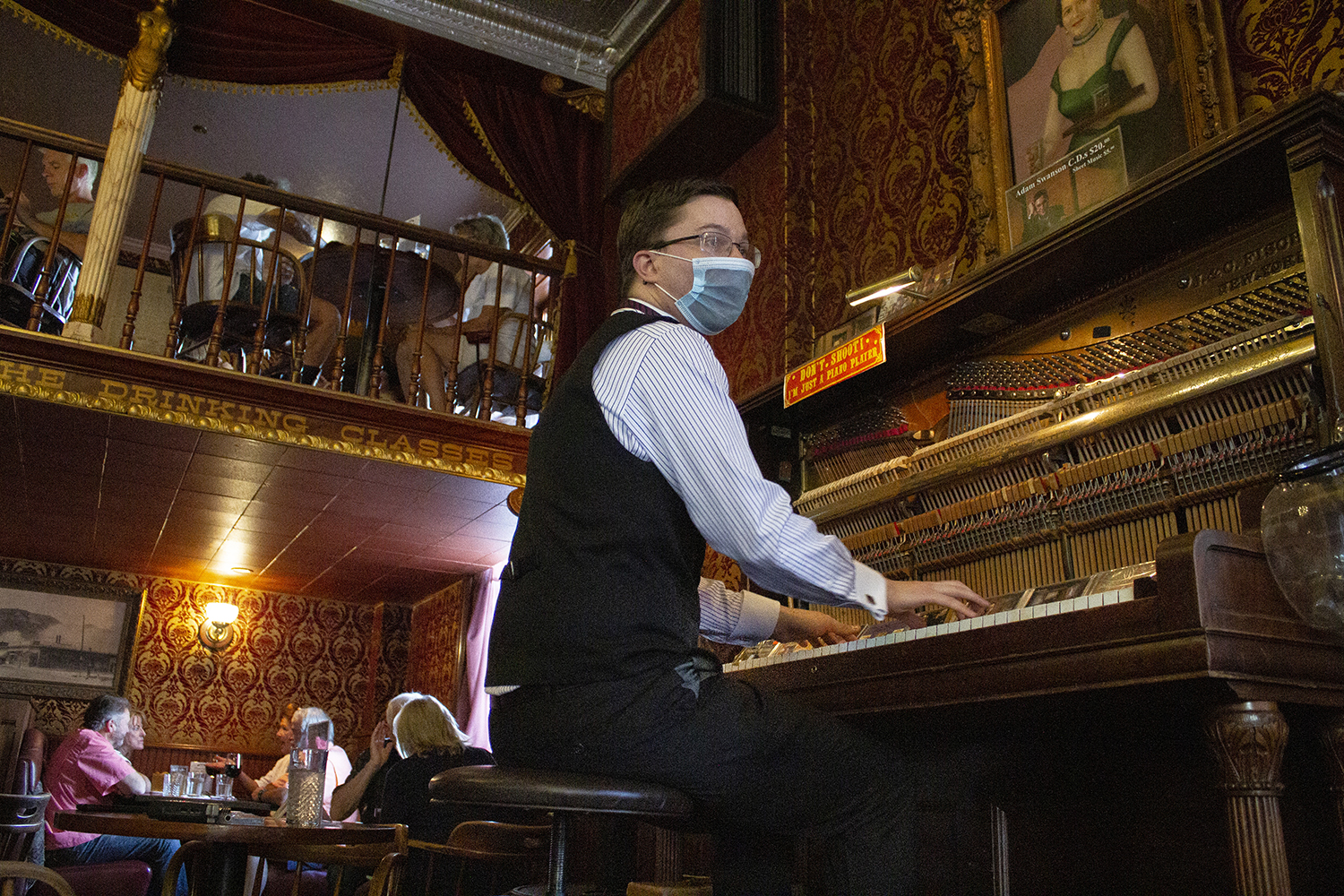